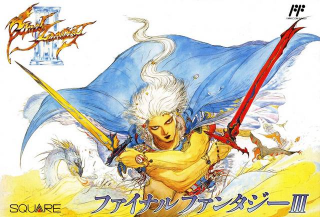 Note that the names of characters, places, etc. used in this guide are based off of the Chaos Rush translation, which is closest to the official Square Enix translation for FFIII on the Nintendo DS. When possible, I will try to use both names with the Chaos Rush name first followed by the early translation in parentheses.

It will appear like this, as an example:
Gysahl(Gisahl)

This is not an official manual, walkthrough, or critical review. This document is a simple guide for the current achievement set available on RetroAchievements. This guide will give the player tips on earning the achievements, hash compatibility, and any other necessary or useful information.

Final Fantasy III is a role-playing video game developed and published by Square for the Family Computer. Released in Japan in 1990, it was the third installment in the Final Fantasy series. It is the first numbered Final Fantasy game to feature the job-change system. The story revolves around four orphaned youths drawn to a crystal of light. The crystal grants them some of its power, and instructs them to go forth and restore balance to the world. Not knowing what to make of the crystal’s pronouncements, but nonetheless recognizing the importance of its words, the four inform their adoptive families of their mission and set out to explore and bring back balance to the world.

This game further establishes many of the Final Fantasy series norms that were set in Final Fantasy II, such as chocobos, expanded character classes, and familiar spells, while also bringing back the experience point system of the first game. Additionally, certain features of Final Fantasy IV, such as the limited inventory slots, Fat Chocobo, and summon spells, started in this game.

The game uses a battery to save game data across three slots. Players can save the game at any time while on the overworld map to any one of the three slots.

Currently this game has 14 unique ROM(s) registered for it with the following MD5s:

There are no leaderboards currently associated with the game.

There are a total of 77 achievements, which can be broken down into the following categories:

No discussion on the story achievements here as you simply need to play through the game to earn them. You can’t miss them!

All of these achievements are MISSABLE because almost all of them are tied to completing a dungeon, including a one-time boss battle, under specific conditions! Prior to attempting, I highly recommend saving prior to attempting. If the achievement doesn’t pop upon completing the boss fight, reset and try again. You should be safe if you set up the party’s Jobs prior to entering the dungeon associated with the challenge.
Make sure you have at least ONE MAGIC KEY from Gysahl(Gisahl) prior to leaving the Floating Continent for the first time (or get four to be safe)!

…and The Onion Knight Equipment Achievements

This following guide is based on the work written in this GameFAQs strategy: The Fully Equipped Onion Knight FAQ by OnionKid/SirBahamut. Make sure you are using an emulator that supports Fast Forward. I use RALibretro or plain RetroArch while in Hardcore mode so that I can toggle fast forward and configure my controls to make things easier.

In conclusion, the Onion equipment grind isn’t fun, but hopefully this process makes it a little more bearable.

Overqualified and Top of the Class

These achievements have been brought up several times already across this guide. To summarize, the first floor of the Cave of Bahamut is the ideal location for grinding. The enemies that appear here, Drakes(Pterosaur) and Grenades, are low risk with high experience point output. The largest encounter group I saw was two Drakes with three Grenades, which can net you 4750 experience points per character. Pacing on the first floor by the entrance allows quick access to the Invincible for healing and saving your progress. Grenades are probably the scariest monster of the pair, but as you get stronger, their explosions shouldn’t kill a character and you’ll kill them before they have a chance to do so. Using Syrcus(Sylx) Tower is not recommended because the encounter sizes aren’t as big and the risk is greater (seriously… Kum Kums(QumQum) are the absolute worst).