RAdvantage is where you share your tricks about how to unlock that one specific challenging achievement that took you hours to do.

And if your strategy is hard to describe with words, no problem! Send us some images or even a video.

Submit your tricks to RANews! Go to RANews page and then “Send Private Message”.

NOTE: Be sure to provide the link to the achievement you’re writing about!

Although this isn’t the hardest achievement on its own, you could consider this a primer for all of the “Rune of (x)” achievements in Ultima VI: The False Prophet: each requires following the intended quest in order to unlock, meaning if you’ve played before or follow a guide that leads you straight to the rune you may miss out on the achievement! Several runes are available to pick up in the world before completing the quest. TheMysticalOne did a great job of making sure you have to play the game the ‘right’ way to get every achievement (although a subsequent playthrough, in which you skip all of the quests you can, is recommended for getting Good Enough As We Are [m])

For Compassion, talk to Ariana, a child who can most often be found in the Britain Music Hall. Exhaust the conversation options, but make sure NOT to lie to her about getting permission from her parents to give you the rune. Travel to the tavern on the opposite side of Britain, and talk to the lady behind the counter, who is Ariana’s mother. Ask her to give Ariana permission to give you the rune, then return to the music hall and tell Ariana her mom said it’s OK to give you the rune.

Each rune achievement requires following a short quest-line in each city that features a rune in the world. A helpful guide for completing most of these quests is available here, which is a hint sheet for an Ultima VI SNES randomizer.

Don’t forget to use the rune on the Shrine of compassion after you get it, which will unlock Shrine of Compassion in short order!

To get this, you have to complete every puzzle in the game under a specific time benchmark. This benchmark depends on the puzzle, but you’ll know it’s been passed if the timer goes from white to black. This is a tall feat, even for those experienced with Picross puzzles. Still, these tips should lighten the load a fair bit.

Speedruns can be very challenging and, until very recently, I would avoid sets with a lot of speedrun achievements. Since challenging a few speedruns as part of the Daily DistRAction, I’ve found speedruns to be fun and very satisfying when you nail a difficult section of a level. I thought I’d share a few general and level specific tips to help others hit the ground running. You CAN speedrun!

When preparing to speedrun, go through the level at normal speed taking several save states, especially before the difficult sections. Then try to speed through each section individually until you feel comfortable running through at top speed. Once you mastered each section then try putting it all together in a hardcore run. Many games have a jump that you can control the height by how long you hold the jump button. Being able to master the short hop will help with sections like the lava spike hallway in the below screenshot. At full speed short hops will land you exactly on the next platforms where a medium jump will overshoot the platform and a big jump will impale Mario’s head on the roof spikes. In general, short hops are a good practice because they are faster than big jumps since you spend less time in the air and more time running. 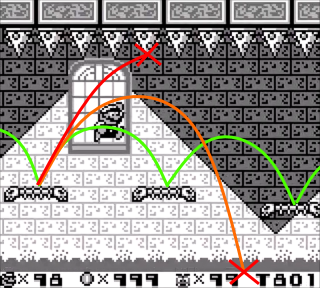 When starting Wario’s Challenge you should begin with 99 enemies banked. When you kill the first mini boss before Wario you will be awarded with an invincibility star. This will make the following four mini bosses a breeze giving you extra time to fight Wario. When you’re finally up against Wario you can get repetitive hits on him by jumping on him again right after you landed the last hit. Use this speedrun and others on the internet when trying figure out a difficult parts of this or any other level. Good luck and see you at the finish line!

The only word of advice I can bare here is: PREPARE. If you bring a Golden Mask, and train your IQ enough to have the Fast Friends skill, you have a 0.1% chance of recruiting Kecleon. Easiest way to get better chances is to find a floor with a Kecleon shop, steal an item, and walk off the mat. Dozens of Kecleon will start to come and try to kill you because you’re a thief. Your only chance to recruit one is during this moment!

Prepare for trouble and make it double, for a wallop amount of points! Pokémon FireRed Rocket Edition is a game where you start as a low-level grunt and make your way to the top. Now, for this big missable at the top, has been a massive roadblock for masteries for many, including myself.

The answer lies in Story Progression.

At the start, you can only steal from the following trainer classes:

Each time you steal a Pokémon, to which you can only select one, you get an increase of bounty. It isn’t much as a Grunt, but after becoming an Admin and getting the Fake Trainer Card from Koga, you get an additional steal change for:

After seizing Silph Co. and becoming an Executive, you can steal Pokémon from (aside from Gym Leaders and the Elite Four) Every Trainer Class Ever! Bikers, Cops, Birdkeepers, Fishermen, you name it!

And becoming the Boss of Team Rocket allows for stealing from Gym Leaders and the Elite Four.

In addition to these notes, take on the side quests, for these leave you doing sinister deeds that will put your bounty higher and higher.

With these notes in mind, the Big 100 Points can surrender now or prepare to fight!