Getting the Right Tools

Before you start scripting you will need to download the newest release of RATools. The program needs a little setup before you can use it: 1) Open the settings menu by clicking on File -> Settings… 2) Enter your in name in the User Name textbox 3) Click Add and browse to the file location of RALibRetro. The icon next to the file location will change to a green checkmark if the emulator was correctly detected. 4) (Optional) Click on the Colors tab and click on the Dark Theme button. 5) Press the OK button at the bottom of the screen. 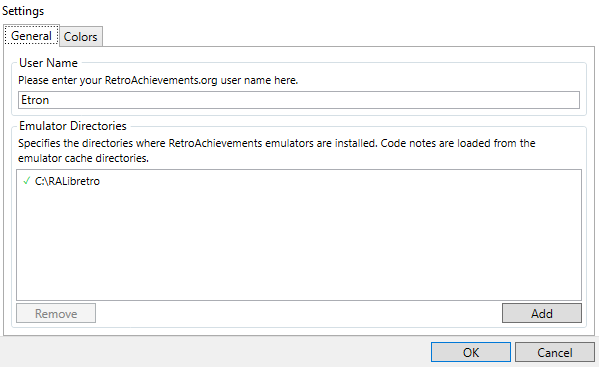 When first learning RAScripts it can be a little daunting to know where to start. One good method of learning how to write scripts is to import existing achievements into RATools. This tutorial will focus on how to import a script into RATools, how to clean up the script if necessary, and how to update changes back in to RALibRetro. There are several cases were you would want to import code with RATools:

If you are just learning RAScripts then it is extremely useful to import a set your familiar with to see how it looks in script form. To import a new script:
1) Load and play a game in RALibRetro (or any of the RA emulators that support editing achievements). You only need to start playing the game which will trigger downloading the necessary achievement data to the RACache folder. 2) Record the game id number which can be found on the top of the menu item RetroAchievements -> Asset List. For this example we will be looking at Sonic the Hedgehog which is game id 1.

1) Open RATools and click on the menu item File -> New Script 2) Enter the Game ID number in the top left and press the Search button 3) All of the achievements, rich presence, and leaderboards will show up on the left panel and all of the game notes will show up on the right. 4) Add a checkmark next to the achievements you want to import and select how you want to filter code notes. When in doubt use All for both the Filter and Dump Notes so that all of the code notes will be included in the new script. 5) Press the Create button to have RATools generate the script 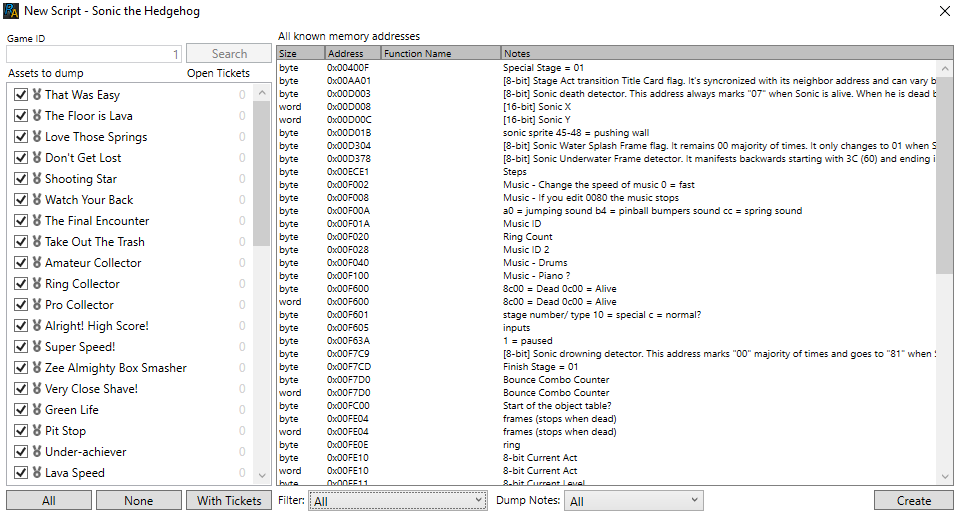 When you import a new script, RATools will generate scripts with the memory addresses and values. Below is an example of what the achievement “Amateur Collector” looks like when imported.

To make the script easier to understand and maintain it is recommended that you replace the memory address and constant values with variables. By using the find/replace function (Ctrl+H) in RATools you can replace all of the instances of the same memory with variables quickly. Then make a variable before the function for each replaced address. For this example we will replace:

Notice how you can easily read the above function and understand what is going on. By using the find and replace method any achievement that uses the memory word(0x00FE20) will now reference Rings instead. The next step would be to use functions for similar types of achievements. For example, the above ring collecting achievement has a 100 and 200 rings variation where the only difference is the number of rings to collect. There is an example of how to make a function for this type of achievement in Example 1A.

If you wish to see how the script changes you made compare to what’s in the core then select the achievement from the list on the left panel. A filled in circle next to an achievement indicates that it is new and does not exist in core, a half circle indicates the achievement has changed from the core, and a hollow circle means that the script matches the core. Lines added by the script will be colored green and lines remove will be colored red. To get back to the code view, click on the script name at the top left. Note that RATools has some optimizations built in so it will automatically improve existing code. The example below shows such a case where the optimizations has made the code cleaner although no changes were made in the script.

Once you are ready to test you can export the updated code back into RALibRetro with Edit -> Update Local. Note that the script must be error free to proceed with the update. Select all of the achievements you wish to update and press the OK button. Your new updates will appear next time you open RALibRetro. If RALibRetro was open during the update you’ll need to select the achievements that were updated and press the Reset button to reload them from the local cache.

This tutorial will show a few examples of how to use both variables and functions to create some basic achievements in RAScript. Sonic the Hedgehog was chosen as the tutorial example for its simple memory and because it is such a well know title. The example script will be used to highlight aspects of the tutorial.

Note that this tutorial will touch on some programming fundamentals but it will not go in to depth. If you are new to the programming world there several free sites online that would be a good introduction. This series of tutorials will use video links from Khan Academy to help explain programming basics where appropriate. 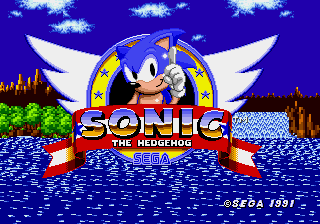 Variables are abstract data elements that allow the programmer to store and manipulate different types of data. As a programmer you can create and use variables as needed to accomplish your goal. If you are unfamiliar with the concept of variables then review the Variables and More on Variables videos from Khan Academy.

In RAScripts a variable can be:

The following code is using variables to abstract memory locations with easy to understand names. For example, it’s much easier to understand what the variable Rings is used for instead of byte(0xFE20). One major point is that variables must be declared before you use them, therefore many scripts declare variables right at the beginning.

Functions are modules of code that can be reused as many times as needed. If you find yourself writing a repetitive piece of code it would often be better written as a function. When you call a function all of the code inside of the function is ran, then the function returns a result variable once complete. If you are unfamiliar with the concept of functions then review the Functions, Function Parameters, and Function Return Values videos from Khan Academy.

Like variables, functions need to be declared before they are called, therefore this example defines the following functions after the memory variables are defined. We define some helper functions that help further abstract the code from the raw memory address and values which help make it easier to understand. These helper functions will be used later in the examples.

The InNormalStage() and InSpecialStage() functions are used as shortcuts that return a condition to check if the player is currently in a normal stage or a special stage. The Active() function returns a more complicated condition that handles the demo and cheat protection for the set. The benefit of wrapping up all of the protection conditions in one function is that if a new type of protection was needed, then you could simply update the Active() function and each achievement using Active() will get updated with the new protection.

Rings are the main object which Sonic collects and Sonic gets a life for every 100 rings accumulated. The memory for rings is a byte which makes it easy to check when the value of the rings goes above a certain threshold. To make sure that the player is not watching the demo or cheating the following code adds the Active() and InNormalStage() functions to the trigger condition. 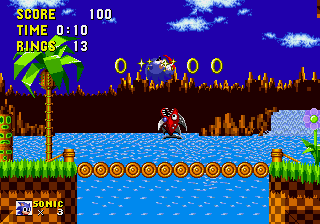 To help understand how this script is compiled by RATools we will dissect it step by step until we get to the code used in RALibRetro. Note that this might not be the exact steps the compiler takes however, it should give you a good picture of how the script is interpreted. We’ll use the function to collect 15 rings as an example. The compiler will use the same process for each of the achievement functions.

Being a function the compiler will jump to CollectRings() and use 15 in place of the parameter count.

Next the compiler will jump to the functions Active() then InNormalStage() which would be the equivalent of writing.

Finally the variables would be replaced with the actual memory addresses.

Even though the above code is equivalent to what we started with, it would be more difficult to understand what is going on if it was written like this. Now that we are down to checking memory locations and values, the code can be converted into something that RALibRetro would understand. 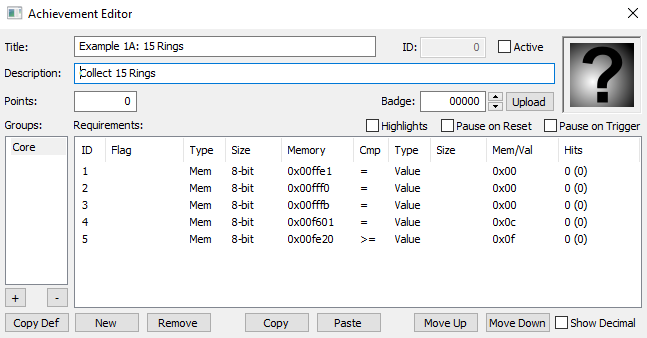 Sonic the Hedgehog is divided into seven zones each with three acts (except the final zone which is an end game boss battle). It appears that the developers changed around the order of the zones and acts since they are non-sequential. This means we need to know the last and next level id to detect a level transition. Note that in the code below, a series of variables are declared for each level in the game. That way when we are looking for a level transition we can use the name of the level rather than needing to know the id value. 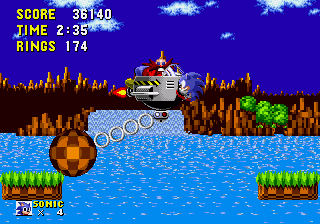 Like the previous example let’s dissect one of the achievement functions step by step until we get to the code used in RALibRetro.

Being a function the compiler will jump to ZoneComplete() and use zone = “Green Hill Zone”, last = GreenHillZoneAct3, and next = MarbleZoneAct1 for the parameter values.

Now let’s replace Active() and the Transition() functions with the parameters last = GreenHillZoneAct3 and next = MarbleZoneAct1.

Finally the variables are replaced with the actual memory addresses and values.

Here’s how the achievement looks in RALibRetro. 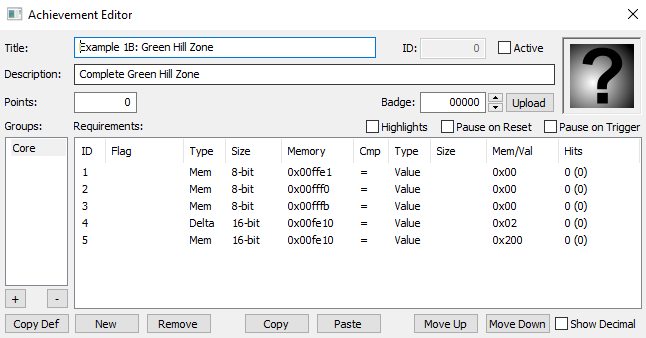 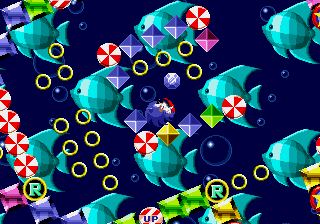 A) Using the memory addresses provided in this example make a function that can generate achievements for collecting each chaos emerald. B) Using the same method as Example 1A and 1B dissect one of the achievement functions step by step until all the variables and functions are removed.

The following variables have been created to help with figuring out which emerald is in which special stage.