This tutorial will show a few examples of how to use AddHits to create some achievements in RAScript. Streets of Rage 2 was chosen as the tutorial example to show how adding hits can be used to improve counting the number of enemies the player has knocked out. 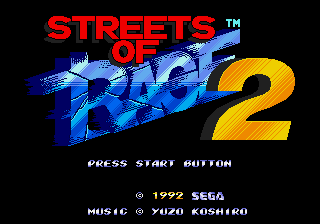 In some cases you’ll want to combine hits together from multiple comparisons. The following examples will show how to add hits together for tracking which characters the player has used and to count how many enemies the player has knocked out. This tutorial will use a few different types of RAScript hits related commands which can be found on the RATools wiki in the Trigger-Functions section.

Streets of Rage 2 has four playable characters: Max, Axel, Blaze, and Skate. Each character has their own statistics and abilities that are significantly different enough to require a different strategy for each character. You are given the chance to select a character once at the beginning of the game and you may change your selection after continuing. 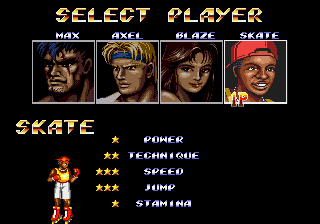 The following code will track if the player has used each character at least once. The achievement will pause with the unless command whenever the screen mode is not in game. That way we don’t trigger hits during the character selection screen. Using the once command the character selected comparison will latch on when said character is selected and it will stay on indefinitely. When using hits you would usually want include a never statement to reset the logic however, in this case we don’t need to reset the logic since the scope of the achievement is for the entire play session. Note that the hits would all be reset in a new session.

The above works perfectly fine for tracking which character is used. A measure could be added to this function to give the player some feedback of how many characters they have used. To add the measure we will need to combine the hits using the tally function. Since the pause would disable the achievement while not in-game another modification was made to check the game mode with the selected character at the same time. When two or more comparisons are combined together like this in an once command they are grouped together with AndNext flags. So the result of this following code is a AddHits and AndNext chain that will sum up to four when every character has been selected.

This is a simple example of combining hits for multiple events. Next we will look at using hits to count enemy knockouts.

The main goal of Streets of Rage 2 is to fight your way through eight different stages full of enemies trying to stop you from getting to their boss, Mr X. As such, you are constantly beating up and knocking out enemies as you play through the game. The game memory tracks how many enemies you have knocked out overall from stage one. You can use this information to add challenges like tracking how many enemies the player has knocked out in one life. 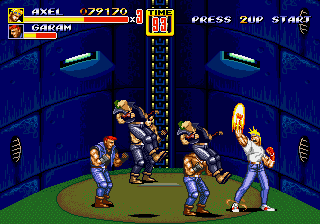 Since the number of total knockouts from stage one might not be the same value as how many knockouts the player has done in one life we must track the value differently. The following code will increment one hit every time the Player1KOs() value increases. The knockout count will reset whenever the Player1Lives() value decreases.

Using AddHits to count like this has a potential issue that would throw the count off. If the player knocks out two or more enemies at once the count would only increment by one. To remedy this you would need to add additional hits when the player knocks out two enemies, three enemies, four enemies, and five enemies. Since Streets of Rage 2 has a maximum of five active enemies at once you would only need to track up to five simultaneous knock outs. The following code uses a combination of AddHits and AddSource to count how many knock outs have occurred:

The above code might be easier to understand if we put some numbers to it. Let say that the previous number of knockouts prev(Player1KOs()) is 100 and the player just knocked out three enemies at once raising the current number knockouts Player1KOs() value to 103. The following comparisons for that frame would evaluate to:

The result of the above evaluation for that frame would add three hits to the total. This may seem like an edge case scenario however, multiple knockouts occur often since the enemies will clump in front of the player.

Using the code Example 2B you can see the hit distribution that occurred during a test run. See the screenshot below for the results: 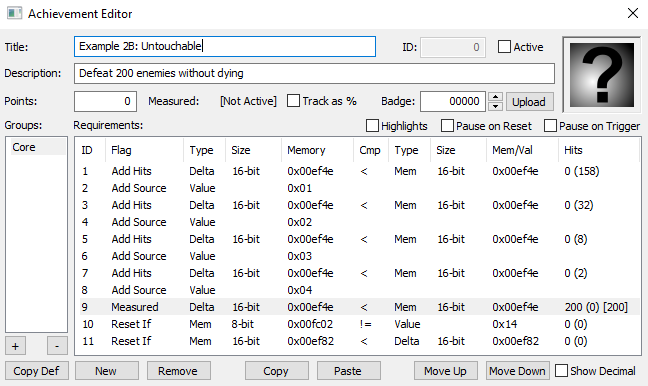 Remember that if multiple simultaneous knockouts occur one hit will be added to all of the previous comparisons. Therefore to figure out the occurrence of each type of multi-knockout you must subtract the hits from the next comparison below. Out of 200 total knock outs there were:

If we were just using the condition prev(Player1KOs()) < Player1KOs() then 42 knock outs would have been missed! I wasn’t able to get a quintuple knock out during the test however, you can sleep well knowing that if a player does get five knock outs simultaneously all five will be counted.

Besides beating up enemies with your bare knuckles the player can pick up and use weapons that the enemies drop. Weapons significantly increase your damage so once you get a weapon, it is best to hold on to it for as long as possible. The Steel Grip achievement rewards the player for holding on to the same weapon for ten or more knockouts. 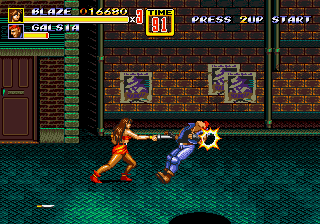 A) Adapt the Steel Grip achievement above to use tally similar to Example 2B so that multiple knock outs are counted.