Written by Sines, don’t hesitate to ping me if you see mistakes in this guide.

This guide is an extended and more explicit version of what was initially my routing notes. Everything has been personally tested by me and should be replicable by following the notes. This is not a play-by-play walkthrough, the goal is to cover all the achievements, provide a single playthrough route to obtain them and explain the more obscure sub-systems.

While exploration is rewarded, for achievement hunting purpose everything can be obtained in one playthrough with a couple of backup saves at key points. After finishing the set, my RA playtime is around 40h but please take into account that I wasted time testing various things and that I play with speed-up mode a lot.

As I cover quite a lot in this guide already, Single playthrough completionist routing is on it’s own page. 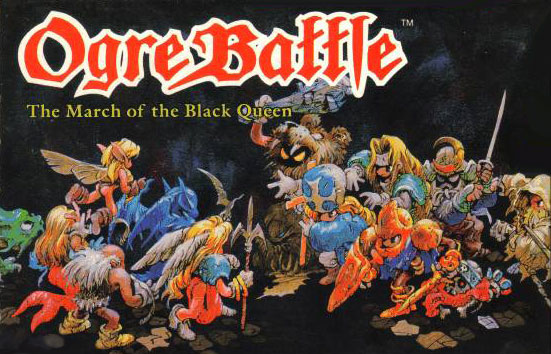 Ogre Battle March of the Black Queen is a 1993 Tactical RPG initially released on SNES with later ports to the PlayStation and Saturn. For Tactical RPG enthusiast it should be quite an intriguing prospect: it’s the start of the “Ogre” video game series that would birth Tactics Ogre one year later and pave the way for the titan Final Fantasy Tactics.

The game appeal comes from the fact that there is almost nothing else like it in term of gameplay, a game where you direct your troops like a RTS but also have full customization of your units composition and almost no direct way of controlling the battle flow once it start. With 13 endings depending on your actions and the myriads of secrets, there is a lot to cover !

Achievements can be roughly be divided in 5 categories

Because they are often the biggest pain point for new player, here are explanations on the major game sub-systems.

Represented by the gauge on the top right of the screen during battle. Overall It is easier to lower it than to raise it. High is 2/3 or more, Low is 1/3 or less and Medium is in-between.

Your reputation impact quite a lot of things such as Endings, recruitments and getting items so pay attention to it. Overall for the completionism making sure you liberate towns with a high ALI unit and don’t have your towns/temple retaken. Card draw is RNG dependent but shouldn’t affect you to the point where you get screwed over just by it.

When you need to lower your reputation quickly you can repeatedly let the enemy retake cities / your HQ. You can also visit the town of Anglem in Diaspola. There the NPC Borgnine give you a trade offer for a Sentoul Demon statue if you have one (you should have at least one through Posha’s quest, I think of Demon for you achievement). If you refuse him you will get a reputation drop and you can repeat the process infinitely.

ALI and CHA stats for most characters are used for class change. For your main Lord it impact endings and characters recruitment. In battle, high ALI units fight better during the day and low ALI during the night, but exception made of units like Vampire and Werewolf the difference is minimal.

ALI is raised by:

ALI is lowered by:

CHA is raised by:

CHA is lowered by:

How to manipulate it ? For lowering purpose it’s quite simple, just park your unit into a liberated town and wait for waves upon waves of enemies to die on your sword. Be careful to not tank your CHA too much for human characters as even evil one needs it to class change. Most monster on the other hand don’t care for it.

Now to reliably augment it outside of regular battle, the trick is to revisit map with Undead neutral units. Undead have 0HP, very low ALI and CHA but can only be killed by White attribute attack. Find a White attribute weapon via treasure manipulation and equip the character you want to boost.

Same trick can be used to raise level characters without changing their ALI/CHA. Because only the character dealing the killing blow get the change but everyone in the unit get the XP, anyone incapable of doing White damage won’t change ALI/CHA but gain levels.

Early game Pogrom Forest is a good spot. At lv15 you have Wraith in the swamps of Balmorian ruins. Antalia have lv21 undeads. For endgame endings unlock, Deneb’s Garden have lv1 Pumpkins that will make your ALI and CHA plummet.

Pretty self explanatory. Please note that the “see special dialog with boss” condition doesnt need said character to deal the killing blow to the boss.

The phrasing is a little ambiguous, I can confirm that you need to liberate the hidden town and the temples for this one to unlock.

Launch a New Game and name your lord FIRESEAL

Meet Ashe in the slums

Receive the Black Pearl, The Glass Pumpkin, and Recruit Deneb

You Are A True Hero…Maybe?

Receive the Star of Hereos

Retrieve the Brunhild on First Visit to the Correct Temple

Retrieve the “Tablet of Yaru”

Receive the Nugget from supporters

Recieve The Moon Rose from supporters

Have a Little Girl give you a Demon Soul

Receive the Box of Salvation from supporters

Receive the Book of Good

Launch a New Game and name your lord FIRESEAL

Quest for the Saga [m]

Receive the Rainbow Shell from Supporters

Receive 3 Items for being a Friend with Galf

Receive the “Folio” from supporters

Live by the Coin or by the Sword

Receive the Beast Coin or Sigmund from supporters

Receive the Orc Fur from Supporters

Receive the Star Fragment from supporters

Receive the Beautiful Statue from Supporters

Receive the Reputation Based Prize from Fort Allamoot

Relief from the Tundra

Receive the “Snow Cape” or “Relief” from Supporters

Find Two Book Of The Dead during your travels

Receive the Platinum Medal from supporters

Receive the reputation based reward from Kalbia supporters

Receive the Crown after answering a question

Everybody is a Winner

Receive the “Big Trophy” from supporters

Finish the game and receive the World Ending

Finish the game and receive the Emperor or Empress Ending

Finish the game and receive the Hierophant or Priestess Ending

As the World Turns

Beat the game and receive the Sun or Moon ending

Finish the game and receive the Chariot Ending

Swinging In the Wind

Finish the game and receive the Hanged Man Ending

Finish the game and receive the Death Ending

Finish the game and receive the Tower Ending

Finish the game and receive the Devil Ending

Beat the game and receive the Fortune Ending

Achieve 99 ALI with the Lord character

Here to do the Devils work

Achieve 0 ALI with the Lord character

Leader is at Level 30