This tutorial will show a few examples of how to create achievements for a game that requires Arithmetic Operations to convert memory values to Base 10 decimal values. Pitfall! was chosen for this example because it has different encoding techniques for the time, score, and lives. 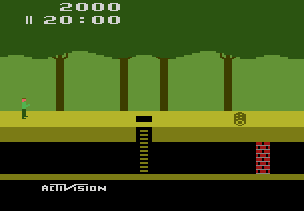 A very common method of encoding values that are displayed on the screen is to use Binary-Coded Decimal (BCD). BCD is a combination of Base 10 and Base 16 systems. BCD uses Base 10 counting in the respect that each place value can be between 0 to 9. However, this value is store as a Base 16 value in memory which means the values above 9 are ignored. The reason for encoding values in BCD is that is simplifies displaying the value on the screen. When drawing a score on the screen the program will look every 4 bits in the score which will be a value between 0 and 9, then the program would draw the sprite for that number and move on to the next 4 bits. Storing values as BCD makes it much easier to display on a screen then storing a value in Base 10 which would require a conversion before displaying.

Pitfall! Is a platforming game where you help Pitfall Harry traverse 255 horizontally connected screens of jungle avoiding obstacles and dangerous animals along the way. The goal of Pitfall! is to recover the 32 hidden treasures before the 20:00 time limit expires. Each collected treasure increases the score between 2,000 and 5,000 points depending on the treasure type. The player will lose points by touching a log or falling down into a pit. This makes the players score an excellent measure of how a player is preforming. 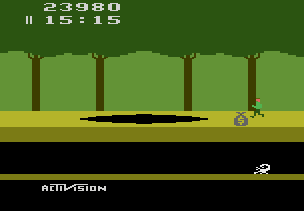 The Score() function in this example handles the conversion from the displayed BCD value to a decimal value. For clarity, each place value in memory is given a function with the naming convention showing an X over the place value for that memory. The value in hundred thousands place is named ScoreX00000(), the value in the ten thousands place is Score0X0000(), and so on until we get to the ones place value named Score00000X(). To convert these BCD memory values to a decimal value we must multiply each by its place value and sum them together. The result is a number that we can use for achievement comparisons, rich presence text, or leaderboards.

Since this function converts the BCD score to a decimal value we can enter any score value as parameters. The lowScore 15,000 and highScore 25,000 were selected since the maximum frame score you can get in one frame is 5,000 points for collecting a diamond ring. By doubling the maximum frame score to 10,000 points we give ourselves a comfortable test range. If the player is playing legitimately they will never increase more than 10,000 points in a frame so the achievement will trigger when they reach 25,000 points. However, if the player is cheating, loads a save file, or the score memory is initially a large value when the emulator starts up then, the achievement will not trigger. We don’t have to worry about save files for an Atari 2600 game however, the other two issues are a concern. 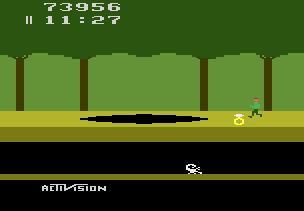 The Time() function in this example handles the conversion from the displayed BCD time value to a decimal value in frames. It uses a very similar method to convert the BDC value as Score() however, the values used for each place differ since there are 60 frames in a second and 60 seconds in a minute. To get the multiplication values that we multiply each place value by we need to calculate how many frames are in one place value. The easiest way to do it is to start at the lowest place value, one frame, and then figure how many frames are in the next place value.

To complement the Time() function we use the TimeSpan() function to figure out how many frames are in a time span. The TimeSpan() function takes the parameters minutes, seconds, and frames then multiplies the hours by 3600 frames, seconds by 60 frames, and adds them to the frames which is already in frames. The code uses this helper function to figure out how many frames there are left when the game clock is 5:00 (ie. 15 minutes after the start of the game). You could use the value 18,000 frames directly however, writing a helper function like this is more convenient and makes the code easier to read.

There are many dangers in the jungle and Pitfall Harry must proceed carefully to stay safe. Harry only has two extra lives before the game is over! Since there is no opportunity to regain lives each life is very valuable. 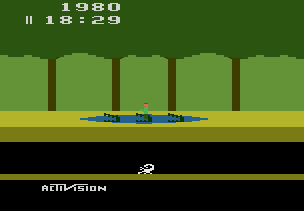 A) Using the functions in the previous example make an achievement for scoring 50,000 points without dying. Additionally, use memory address $000000 which encodes the 1st life as bit 5 and the 2nd life as bit 7.