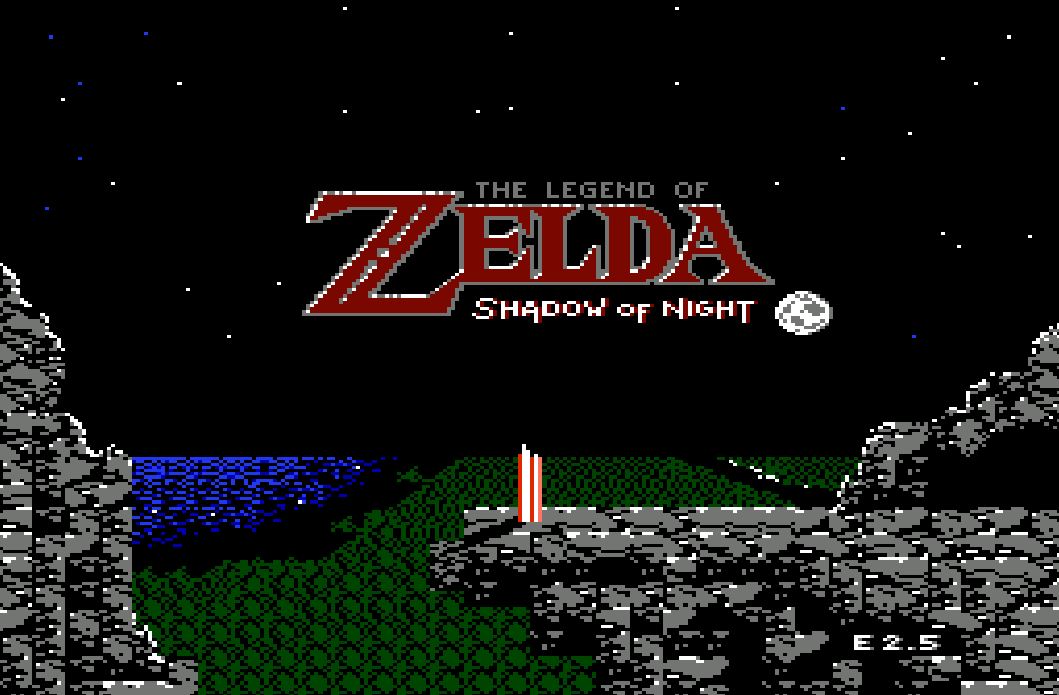 The Legend of Zelda: Shadow of Night is a Zelda II hack made by the_icepenguin in 2011. The game has significantly overhauled assets and updated graphics to produce an immersive new setting that supports the game’s theme. Some game play changes include a new spell that adds a new physics mechanic, lack of enemy stun lock, improved beam sword speed and distance, the need to revisit palaces to obtain previously inaccessible items and keys and much more.

The hack saw several updates from its initial 1.0 release to the final version 2.5. The final version comes with two patches, an Easy mode and a Hard mode. This set was created with the Easy patch because the only difference between the two is the amount of damage that Link does and takes and how many starting lives you are given. The game design is challenging enough that the added handicap to health, damage and lives does not add much more than frustration to the experience.

There is a long play of the hack available, but it was done with a slightly out dated version of the game. There are a few minor differences from the version of this game that is used for Retro Achievements such as a few item locations and palace design updates. This guide ensures that players have all the information needed to successfully master the set and understand what the differences in the long play videos and the current version of the hack are.

Patch is available at https://www.romhacking.net/hack/728/

The below maps do not match the in game palette, but more clearly indicate the true assets. For example, in game the hammer breakable boulders are not distinguishable from regular mountain tiles, but these maps depict them in their true form. The white boxes indicate tiles with subareas, many of which contain lesser items not listed on the maps. The listed map items are those required to master the set. Some items will need certain spells to reach such as Jump, Dash or Fairy. 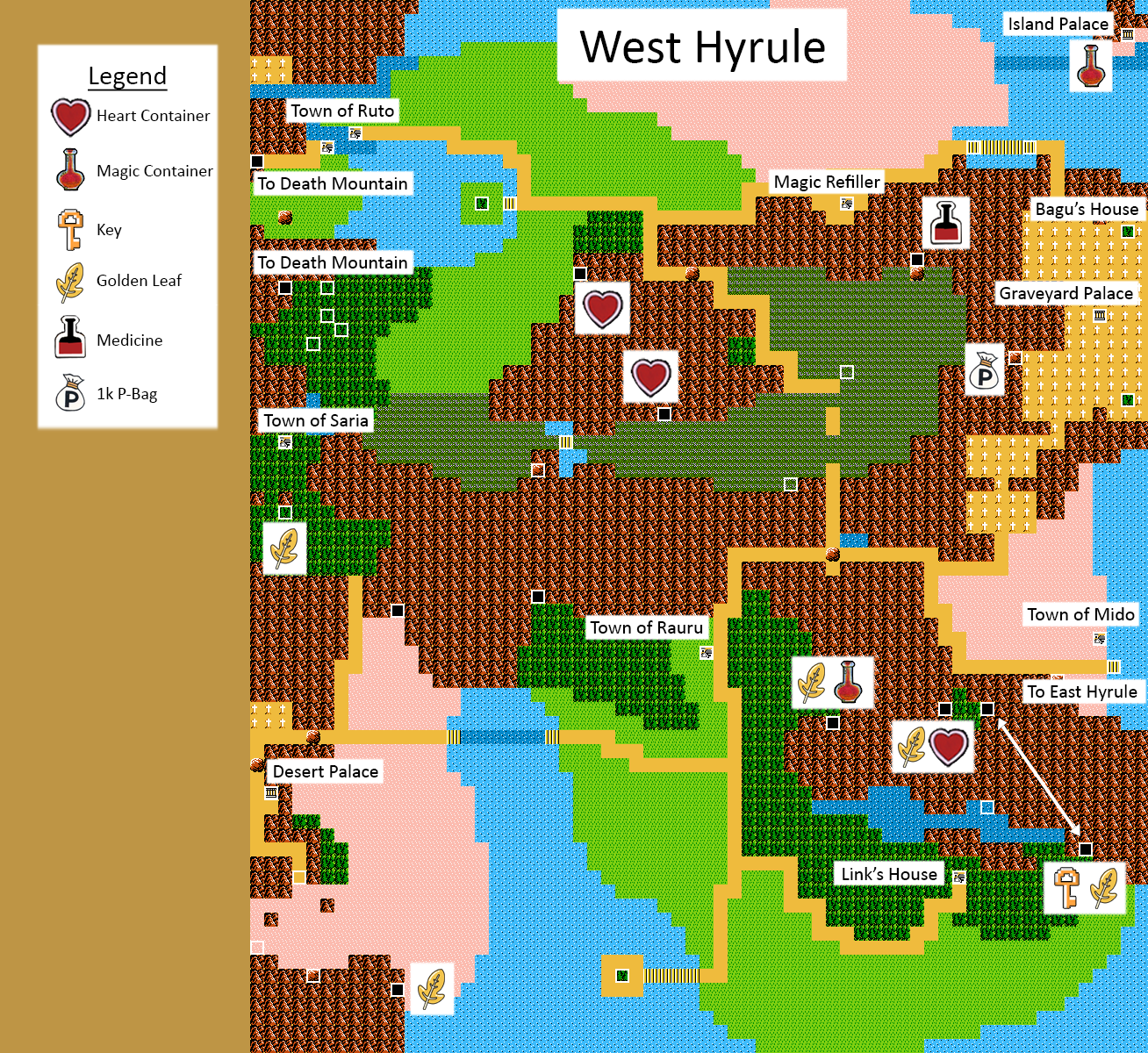 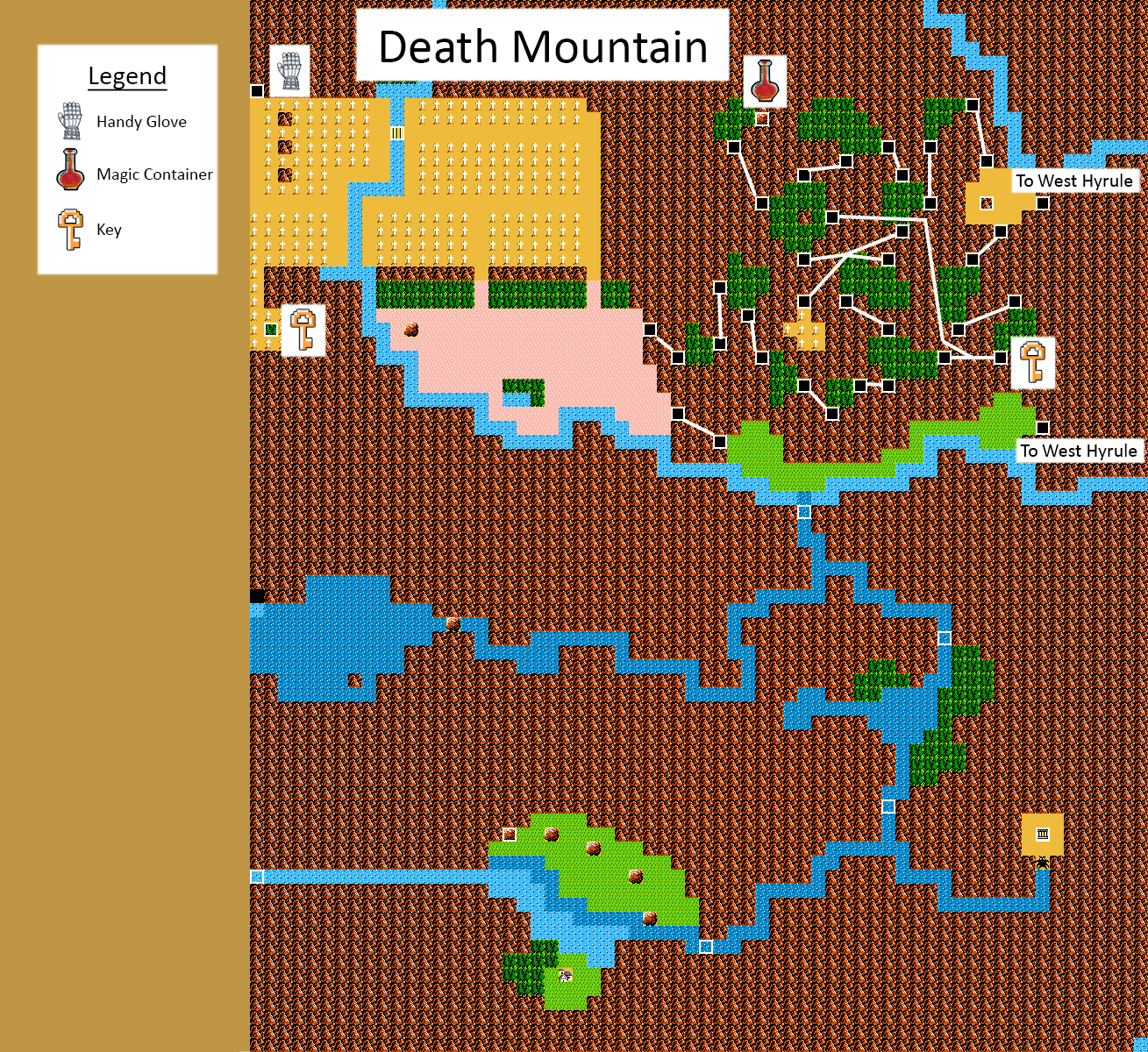 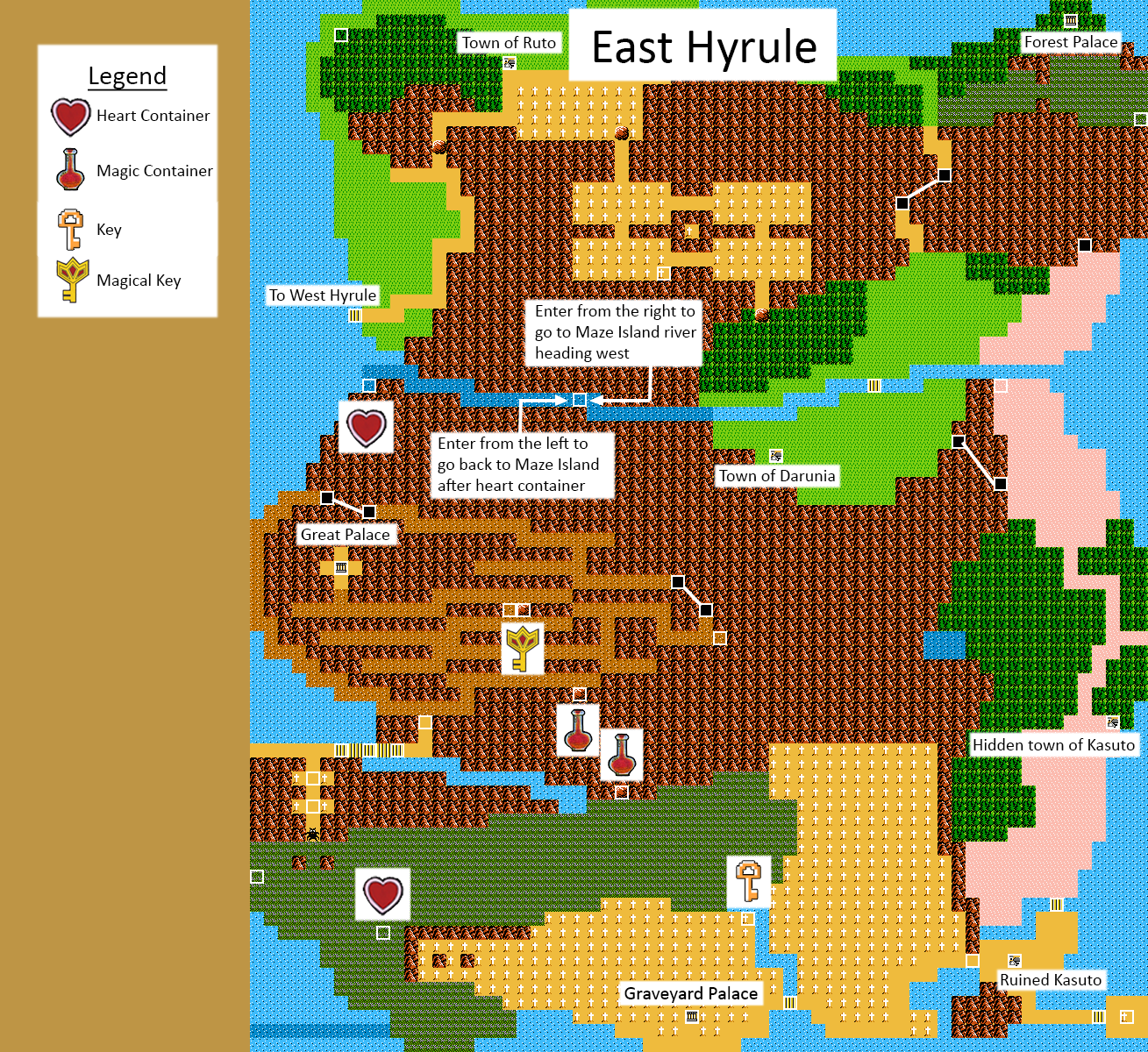 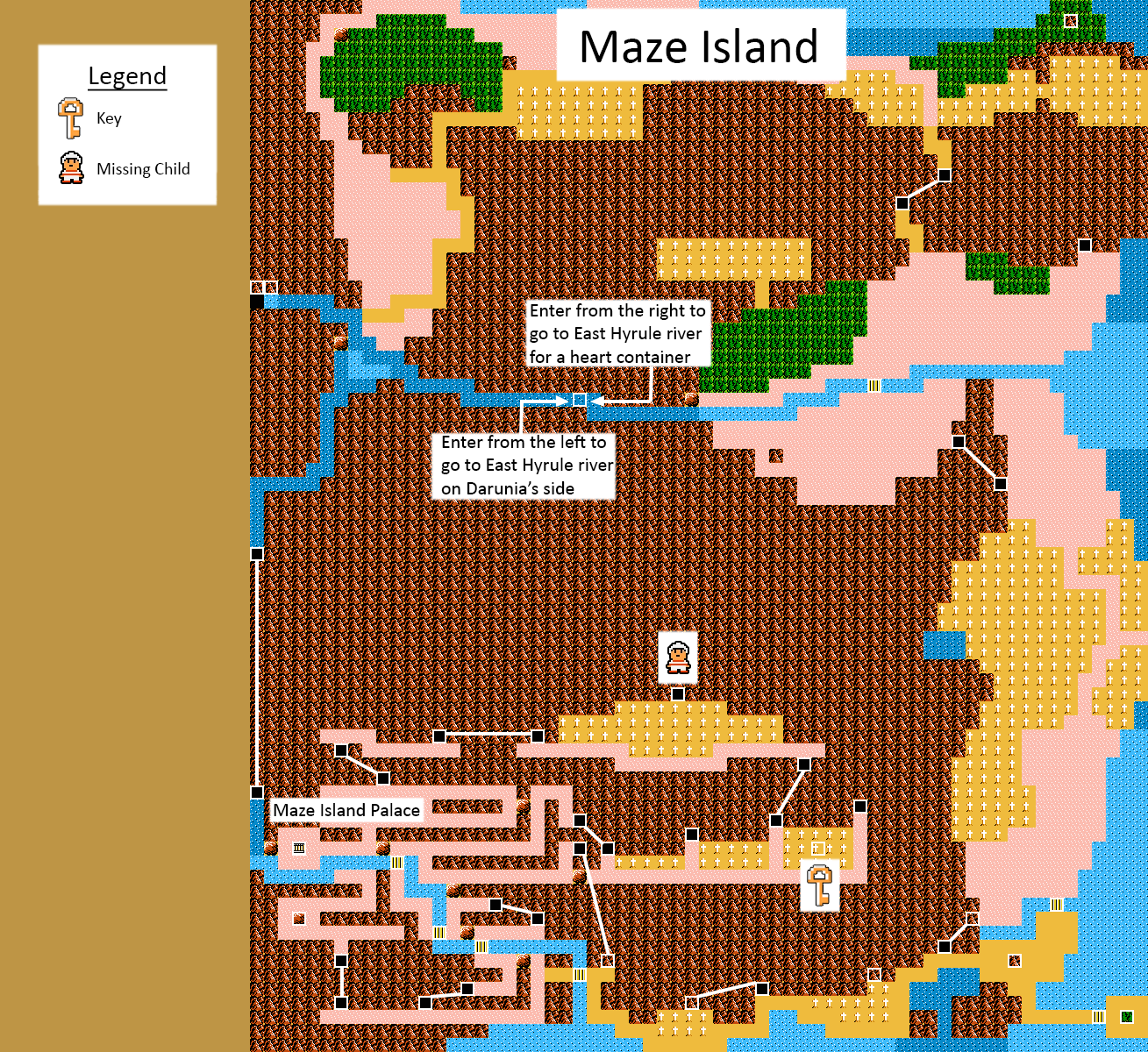 In the town of Rauru, enter one of the houses with its lights on and proceed to the basement to meet a sage who will teach Link this spell.

Use the levels you gain from experience to increase your defense and magic until after you’ve defeated Horsehead in the Desert Palace. This achievement will pop immediately upon his death allowing you to increase your attack with the experience gained from defeating him if available.

This achievement is available the second time you fight Horsehead in the Desert Palace. As soon as you approach him and the battle begins, immediately execute a jumping, crouching attack to hit him backwards. Stay aggressive as he plods forward to ensure he will not progress further than his initial position. The key to success is to quickly land the first attack and continue to keep up the pressure thereafter.

After defeating the second Horsehead, retrieve this item from the Desert Palace as your reward.

See the map of West Hyrule in the Resources section for the locations of the five golden leaves.

Once obtaining the aforementioned five golden leaves, find the house in Saria with the person who is looking for them. Follow them inside and then proceed to the basement to meet the sage and learn the spell.

Use the map in the Resources section to find the forest tile where Bagu’s house is located. Enter it and speak to him.

Use the Jump spell to reach the roof of the house and press the B button to find the cat in the location depicted below. Next, talk to the girl near the door to the house, enter it and learn the spell from the sage in the basement. 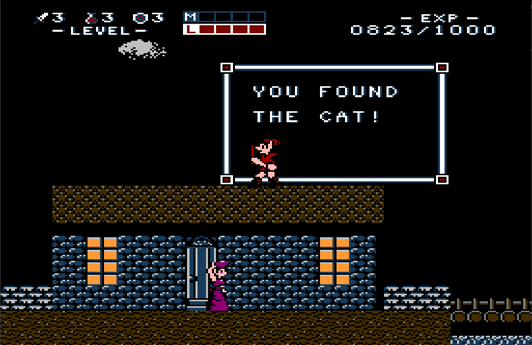 Starting when you exit the cave west of Ruto in Death Mountain, successfully reach the exit of the far western cave without dying for this achievement. If you do die, you can restart the achievement by exiting the cave near Ruto and reentering it.

The key to this cave is located just south of the entrance (see map in Resource section). Once past the locked door, reach the end of the cave to find the Handy Glove.

Enter one of the houses with its lights on in the town of Mido and proceed to the basement to find the warrior who will teach Link the Jump Thrust technique.

After obtaining the Handy Glove, return to the room beyond the second Horsehead battle and break the destructible blocks in order to find Helmethead. Defeat him for this achievement.

During the battle with Helmethead in the Graveyard Palace near Bagu’s house in West Hyrule, ensure that you only attack him while the Fire Moa is on screen. The Fire Moa will often fly off the side of the screen in a predictable pattern, so be patient with your attacks.

After defeating Helmetfire in the Graveyard Palace in West Hyrule, obtain the raft as your reward.

After obtaining the raft, set sail from the dock near Mido to reach East Hyrule.

Search near the very western exit of the entire town to find the key, then talk to the girl who was missing it to gain access to the house. Proceed to the basement to meet the sage and learn the spell. 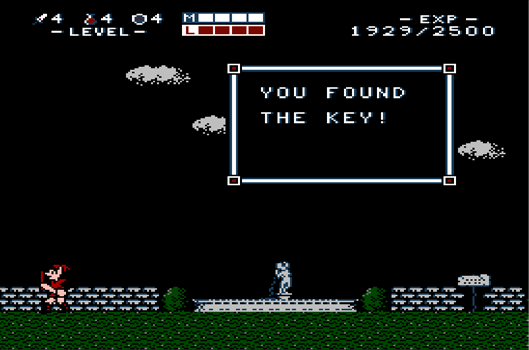 Enter one of the houses with its lights on in the town of Darunia and proceed to the basement to find the warrior who will teach Link the Jump Thrust technique.

While there will be three Gooma fights in the Forest Palace, the first encounter is the easiest since there are no other enemies present. Use the Dash spell to increase your running speed. When you attack the Gooma, run in and execute a crouching attack and as soon as it hits run away. Try to preserve distance by hitting the Gooma with the tip of your sword. It is important to actually hit the Gooma to send it backwards and give yourself a bit more time to run away. You cannot be too passive in this fight or the Gooma will back you into the corner and you will likely not survive. If you are having difficulty, increase your attack level.

Note there might be more than one room that looks like this, so continue to explore if it appears to not work in the first similar room you find.

After defeating the third Gooma, proceed forward to find this item.

This achievement can be done starting from either side of the room. The key is to have Dash selected before entering the room and while holding the directional pad to walk, cast Dash without stopping that input. It is important to save time in the first half of the room by not slowing down at all. You should run off the first ledge and then begin jumping and skipping a ledge during the first half of the room. For the second half of the room, you should plan to land on each ledge, but continue to move quickly. This is not an extremely tight achievement, but there is not much room for unnecessary delays.

See the map in the resources section to locate the missing child. Note on the map that a necessary key is located in a secret grave in the clearing south of the cave’s entrance.

Return to Darunia after rescuing the missing child and speak to the sage in the child’s mother’s house to learn the spell.

See video for demonstration. There is an RNG aspect to this achievement depending where Carock teleports. Level up Defense if you are having difficulty and cast Heal to keep your health up.

As Luck Would Have It [m] demonstration video

After defeating Carock, proceed forward and find this item.

See the map of West Hyrule in the Resources section for the location of the medicine.

Return to Mido and enter the woman who needed medicine’s house to find the sage and learn this spell. 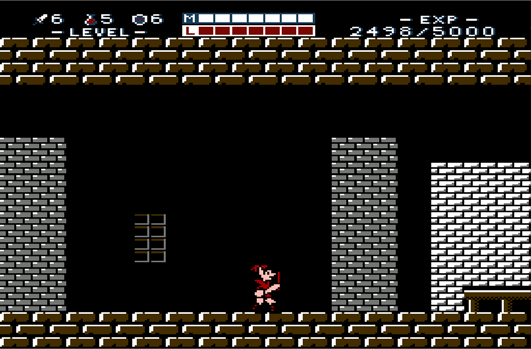 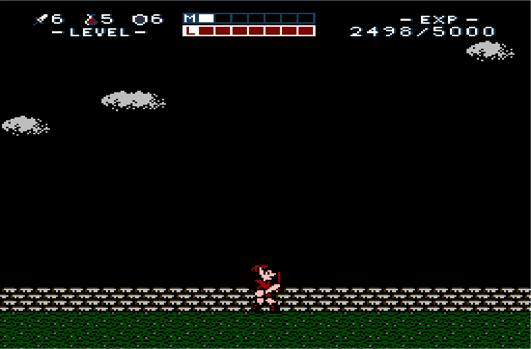 See video demonstration. The Fire Moa is only vulnerable to Fire, so cast that spell and prioritize killing the Fire Moa. It will not respawn once defeated so killing it will also make the Barba fight easier.

See video demonstration. The wizzrobes can only be harmed by reflecting their own spells at them. If you do not cast Reflect, you cannot harm them. Their presence during the fight makes defeating Rebonack more difficult, but it is easy to not accidentally fail this achievement.

After defeating the third Rebonack, proceed forward to find this item.

See the map of East Hyrule in the Resources section for the location of the Magical Key. It is hidden in a breakable rock.

Several rooms beyond the illusory wall in the Fake Wall in the Great Palace achievement, you will find the Thunder spell on an altar.

The long elevator is a puzzle that requires you to go up several floors, then down one then back up in order to progress. Each level has illusory walls, but the one with the fairy behind it marks the level at which you must go down and then back up to reach the top of the elevator shaft.

Fake Wall in the Great Elevator

Reflect is used to block Thunderbird’s fireballs. Without it, you will take damage if you touch a fireball under all circumstances. Just defeat Thunderbird without casting reflect to obtain this achievement.

The Best Defense is a Good Offense [m] demonstration video

Defeat Dark Link in the battle after Thunderbird. Be careful of the lava on both sides of the room that will be hidden once the room turns dark. Jumping standing attacks work best against Dark Link. Use your magic to keep your health high.

Use the map in the Resources section to locate two Magic Containers.

Use the map in the Resources section to locate five Magic Containers.

Use the map in the Resources section to locate two Heart Containers.

Use the map in the Resources section to locate five Heart Containers.

As you gain levels with experience, choose Attack three times to unlock this achievement.

As you gain levels with experience, choose Attack seven times to unlock this achievement.

As you gain levels with experience, choose Magic three times to unlock this achievement.

As you gain levels with experience, choose Magic seven times to unlock this achievement.

As you gain levels with experience, choose Defense three times to unlock this achievement.

As you gain levels with experience, choose Defense seven times to unlock this achievement.

As shown in the video, jump from the grass and ensure that you release the directional pad before Link crosses over the bottom step. Continue to jump as soon as Link touches the ground and he will preserve his momentum during subsequent jumps. Eventually he will start losing speed, but it should not be especially difficult to achieve this. Casting Jump and/or Dash will make this significantly easier.

See the maps Hyrule in the Resources section for the locations of the 1000 point treasure bags. Obtaining any one of them will trigger this achievement.

Thanks to the_icepenguin for the creation of this hack.